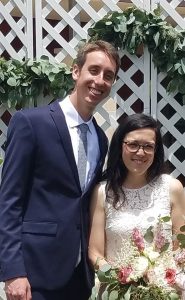 Andy graduated from Christian Academy Japan in 2005.  He attended Azusa Pacific University and graduated from Cal Poly Pomona. He is married to Ryoko (Komatsu) from Japan who he met while at Azusa. He is working for a Japanese company in California and Ryoko is at home with our grandchildren in west LA.

Married, On Staff, Ben and Quinn:

Ben graduated from Christian Academy Japan in 2007.  He graduated from the University of Central Florida with a degree in Sports and Exercise Science. He joined Cru staff in September 2015 after a year of campus ministry in Tokyo, where he met Quinn Yanaga, and they both serve as campus staff with Cru at Cal State Fullerton.

Melissa graduated from Timber Creek High School. She studyed Early Childhood Education at the University of Central Florida. She is married to Ben Smith who is also a UCF grad, enjoys working with children and is working as a second grade teacher. Ben Smith works with Lockheed Martin here in Orlando.

Josh is loving computers, video games, soccer and marches in the Timber Creek Regiment, one of the top high school marching bands in Florida. He is in Timber Creek High School.